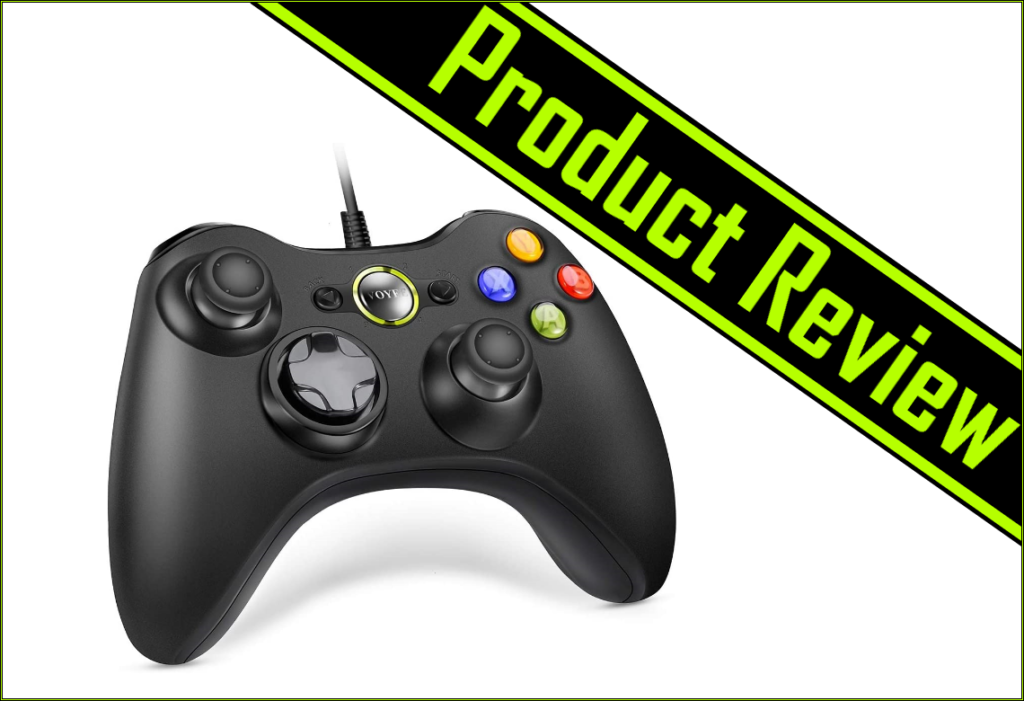 The VOYEE Wired Xbox 360 Controller is exactly the kind of controller I was looking for to use as a dedicated PC controller, but if you still play on Xbox 360, then this controller is a good cheap replacement for your older controllers.

Product: VOYEE Wired Xbox 360 Controller
Manufacturer: VOYEE
Where to Buy: Amazon
My Rating: 9 out of 10 – Recommended

It’s really interesting to see how much our controllers have changed over the years. From the old NES controller to the multi-button Xbox controllers, things have really changed. But in trying to be unique, many companies try way too hard, often failing to recognize the most important aspect of any controller; ergonomics.

This term is in my opinion the reason why Microsoft really hit it out of the park when they made the Xbox 360 Controller. It was known for its legendary comfort, and pretty much set a high standard for many others to follow. These days, almost every controller manufacturer has tried to replicate the look, feel, and button layout.

As we moved into the next generation of console gaming, I couldn’t help but feel as though the quality of the controller design fell a little flat. They just didn’t quite have that ergonomic feel of the original Xbox 360 controller. And so, in my quest to find a replacement controller to use for my PC, I’ve decided to take a step backwards and look at controllers that could stack up to what I love in comfort gaming.

I will be honest, it’s really hard to find the official Xbox 360 controller anymore, at least not without having to browse used game stores or eBay. I’ve decided to take a plunge into third party manufacturers to see if I could find a cheaper one that not only does the job, but still has the comfortable feel of the official controller. And then I came across the VOYEE Wired Xbox 360 Controller. Here’s my experience with the controller.

Out of the box, the controller comes in bubble-wrap packaging. There were no instruction manuals included, but considering that it is a plug and play device, it is fairly straightforward to use!

The cable is made of the typical PVC casing you find on pretty much any electronic device. For the length, the cord is a little short of 7ft, but considering that I plan on using this primarily on my PC, it’s just the right length for me.

As you can clearly see, it is a wired controller, which is what I was planning on going for in the first place. The controller connects to a USB port, and can be used with an Xbox 360 (both the original and the slim version), as well as any PC that supports Windows 7,8, and 10.

When I plugged the controller into my Windows 7 computer, the Xbox guide button lit up, just as it used to when first connecting. After a few minutes of installing drivers, my computer was ready to use the controller.

And so, to make sure that it worked properly, I loaded up Skyrim Special Edition, and took a look… I tested all of the controls of the game, and all of the buttons worked.

The buttons are raised slightly, and when compared to the official controller, they are actually closer to your thumb when you hold the controller naturally.

The thumbsticks are quite responsive, snapping back to their original position when you let them go. Their rubber pads feel like the official controller all the same.

The D-Pad also feels very responsive; in fact they have a “clicky” feel to them unlike the official one.

The left and right bumpers have an audible click to them, perhaps louder than that of a mouse button click. The original 360 controller’s bumpers do not have as loud of a click, so depending on whether or not the sound bugs you, I find that they are very responsive. The triggers feel just like the official one, which is great.

Is it worth the Price?

Absolutely. This controller is cheap, no doubt about that, yet it still works just like the original official controller. This is for people who aren’t looking to spend big bucks on a high-end gaming controller.

To sum things up, this is a great replacement for your aging Xbox 360 controllers, but more importantly, it is an excellent PC gaming controller. It has the comfort of the original one, and it definitely does the job just as well, without having to shell out for the more expensive Xbox One controller. It is a third party product, which can be reflected in the price. I find that this controller is ideal for those who are only looking at getting a cheap controller for playing games on PC, without the need for any bells and whistles. Based on the 3900+ reviews on Amazon, I think it’s safe to say that many gamers enjoy using this controller.

I hope you have enjoyed my review of the VOYEE Wired Xbox 360 Controller. If you have any questions, feedback, or requests, feel free to let me know in the comments below!