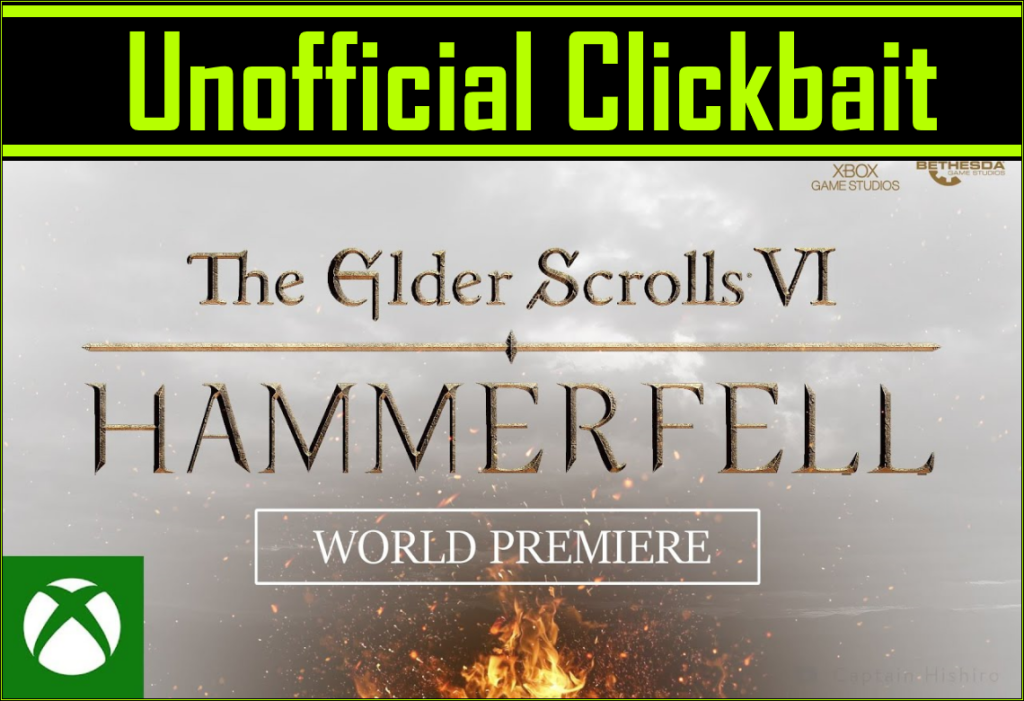 A few days ago, I came across a YouTube video recommendation in my news feed.

The first thing I saw was the thumbnail. It had “The Elder Scrolls VI: Hammerfell” on the front. Interesting… But before I clicked, I took a moment to read everything…

Notice the ellipsis at the end? That usually means that the title is longer than what your phone/tablet can display. What was the rest of the title? Apparently, we have to click on the video in order to find out.

That’s an instant red flag for me, personally. This sounds like another one of those fake fan made trailers. But as with any clickbait things on the internet, I felt compelled to click and see what it really was. And sure enough, I saw that the video was indeed, just another fanmade trailer of The Elder Scrolls VI.

If I remember correctly, I believe Bethesda themselves told us that TES VI is a long ways away, as they are working on other projects. So there’s no reason to convince ourselves that there’s going to be any big announcements, much less any sudden news.

And yet, the comment section of that video seems to indicate that a lot of people did not get the memo. In fact, there’s a lot of backlash. When I last checked, it had double the dislikes when compared to the likes. As of writing, the YouTube video sits at almost 250k views, and it’s only been out for 2 days now. The uploader even posted a comment acknowledging the backlash.

I do wish I could have a little bit of sympathy for the uploader after seeing some rather angry comments directed at them, but I can’t help but feel as though they were trying to get some more views and some attention drawn to their video, and it is clear that it is working out for them.

After all, even Google was misled into thinking this was an official piece of content.

It was Google News that had suggested this video to me in the first place, so it was very impressive of the uploader to make such content that could cleverly make it into our feeds, bypassing the smart algorithm that Google uses to show search results based on our own searches and interests. Even now, when I google “Elder Scrolls 6”, I still see that the video in question comes up on the first page results, and probably will for quite some time.

The thumbnail is not helping things, especially when they use company logos. That last part of the hidden title? It had “Concept” in it. Ok, so perhaps you could argue that the uploader did cover their bases by including this important detail.

But it is in the nature of a lot of viewers to read the first part of the title, and unfortunately, a lot of devices tend to omit part of the title, which happened to be that “Concept” part. And so, many eager fans flock to the video like a moth to a flame, believing it to be the real deal… when in truth, it was just a picture of a flame. And someone’s shining a flashlight on the picture to make it look bright. And the picture shows “Reveal Trailer”… you get the idea, hopefully.

I have to admit, for the first 5 seconds of seeing the thumbnail for a new Elder Scrolls “trailer”, I got really excited, until my experience in the past brought me back down to Earth to look at it with solemn skepticism.

Here’s my humble suggestion; the next time you see any kind of news that seems way too good to be true, check the official source first. Go to Bethesda’s website, and see for yourself. If anything was announced, or released, it’s bound to be there first. Sure, it might take a few more clicks, but at least you get the proper news.

Because I was curious, I took some time to look up the Youtuber’s channel. It turns out that they have made a few videos of “concept trailers”. They seem to follow a similar title format, with “Concept” displayed at the very end of the title, so that they can say that it is not an official trailer. Funny thing is, one of those videos had a disclaimer at the very start that clearly told viewers that what they were about to see was not official.

The concept trailer they made for The Elder Scrolls VI, did not have such a disclaimer.

I feel like this Youtuber could have saved themselves, and so many others the headache if that TES VI video had the same disclaimer at the start. It’s better to be frank and upfront with your audience, even if it costs a few views.