Stardew Valley is a farming simulator with RPG elements, in which you build a farm on a plot of land. Using a set of old tools, you set out to begin a life living off of the land, growing crops, raising livestock, and mingling with the local town.

This game can be considered a spiritual successor to Harvest Moon.

I’m going to talk about my experiences with this farming game, and try to answer the question: is Stardew Valley worth it?

(Spoiler: It’s totally worth it!)

There is a lot of stuff to do in Stardew Valley

There’s really no other game out there just like this one.

The game’s main selling point is the freedom to build the farm of your dreams, and the creator gave us plenty of things to work with. And a lot of space too! You will need to clear up some space before you can start tilling the land to start growing vegetables.

This game incorporates a number of RPG elements that really show off their flair as you progress further. Most of these are based on the various activities you can partake in: Farming, Foraging, Fishing, Mining, and Combat. Each of these have skills which make your job easier, and you can unlock crafting recipes to help with your farm.

There is a large procedurally generated cave which allows you to do some dungeon delving. Here, you can mine for ore and battle monsters to obtain loot and items for your farm. The deeper you go, the greater the risk of dying, but then again, so is the rewards!

In addition to your farm, you can explore the countryside and the nearby village, Pelican Town. Here, you get to interact with about 30 different characters that run on their own unique schedule, depending on the day of the week. You can even give items to them as gifts, and they may like (or hate!) what you bring them.

It wouldn’t be like Harvest Moon without the obligatory romance and marriage mechanic! Similar in regards to a dating sim, you can court 12 different bachelor and bachelorettes, each with their own unique personality and a number of things that they like or dislike. As you get to know them, you’ll gradually get to become a part of their life, until the time comes to make the ultimate commitment.

What sets the relationship mechanic apart from Harvest Moon is the great depth of each character. In Harvest Moon, you had a number of one-dimensional love interests, with different tastes, but there really wasn’t much. You pretty much picked the one you liked, and set out to woo them with gifts.

In Stardew Valley, When you first meet characters, you initially get the impression of your classic stereotypes; the jock, nerd, emo, etc. But as you make friends with each character, you soon learn that they experience things that can get very personal and very true to real life.

I won’t go into too much detail, as I would hate to spoil their stories.

Things that I Liked 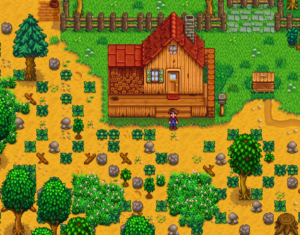 The best thing I liked about this game is the sandbox-styled approach to gameplay. You are given tools, a plot of land, and directions on where to buy the things you need for said plot of land. I love games that allow me to play as I see fit.

There is so much to do that you won’t get bored anytime soon. This isn’t a game where you are expected to plow through it in a few hours. It’s a fun, relaxed setting, and its simple gameplay means anyone can pick it up and have fun with it.

Things that need some work

As much as I like to praise the game for all of the high points, I wouldn’t be doing a good job reviewing the game if I couldn’t see past the good things.

Fishing… simply put. The fishing mechanic is among the fastest ways to make money in the game, but is also a major frustration for many players. The reason for this is the steep learning curve on the fishing minigame’s mechanics.

Another thing that may need some work is the balance between the various ways to make money. Farming involves investing time and money into something, and eventually turning a profit. Some of these aspects, such as raising livestock, require too much work to see a return on the supplies bought to make any money. Other things, such as growing berries, have you swimming in money without having to do much.

Lastly, the game is lacking in instructions. In the beginning, you have a few context sensitive icons that pop up when first being introduced to some of the game’s controls and minigames. Besides that, there is no other way to learn the game mechanics until you start pressing buttons to see what happens. The Nintendo Switch version of the game did improve on this by adding a controller layout screen upon startup.

Controls : 7 – The game is very easy to jump in and start playing, although some of the actions and controls aren’t fully made apparent. In some cases, you may need to press a few buttons to experiment. Once you’ve passed the learning curve, it’s not bad.

Graphics : 10 – It’s a 2D game rendered in a SNES style pixel art, so you don’t need to expect much in terms of realism. It’s very well designed, and if you’re a fan of anime art, it’s very similar to that style.

Performance : 8 – I haven’t found any hiccups while playing. The game boots up nice and quick (the Switch version does have longer load times), and nothing seems to get in the way of gameplay.

Music : 10 – The music is calm, relaxing, and very fitting to the game’s overall atmosphere. The developer is very talented to have made nearly everything in this game! I’ve not found any issues with the music, although some of the tracks can get repetitive as the days go on.

Story : 8 – The story is very simple, and the developer has taken a carefree approach to this, in that you have no time frame in which to complete the game’s story. The villager’s stories were far more interesting than the main story.

Content : 10 – There is a ton of things packed into this game, and you aren’t restricted to just a farm. You can fish, explore, mine, and much much more. The developer is still actively working on the game, and so more content may be released in the near future. I’d take a guess that it may take you about 50 hours before you could consider this game complete, depending on your pace.

In the end, Stardew Valley is a fun farming game that will eat away many hours of your time, and many people have enjoyed this game. There are few things that need improvement however, but it isn’t enough of a downside to detract from the fun. I would recommend this game for anyone who is a big fan of Harvest Moon or anyone who loves farms in general.

I hope you enjoyed this review, and if you have any questions or thoughts on Stardew Valley, feel free to leave a comment down below!