Read on for my humble review of Nintendo Switch, the things it offers for entertainment, and whether it is worth the hype.

The Nintendo Switch combines the power of console gaming with the portability of handheld devices to provide the freedom to play wherever you like. While it has a few flaws, it is a very well designed system that delivers on Nintendo’s goal of providing fun and innovative gameplay.

As Gamestop said, “Will you make the Switch”? 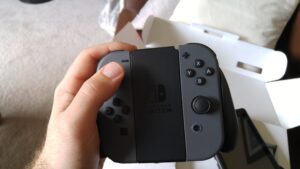 Nintendo: taking the Console Wars in another direction, while still moving forward

Over the last few years, my gaming days have gotten gradually bland… every year, we get a new shooter, a sports game, and another hyped up action game. It’s almost gotten to the point that I’ve put the controller down to play on my smartphone more often than usual, an act which would upset many hardcore gamers out there.

… And then I see Nintendo’s new console, and my faith in the gaming industry is restored.

When it comes to the gaming industry, people like to think that Nintendo takes a back seat to the big companies like Sony and Microsoft. The majority of modern gamers demand for more powerful games sporting enhanced graphics, and numerous features to make the game.

What some people don’t realize is that Nintendo is in a league of its own. Ever since Nintendo released the Wii, the company has been trying to develop consoles that change the way we play games. As a result, Nintendo has extended its reach into a unique niche of gamers alongside the diehard fans of Mario and Zelda.

Sony and Microsoft are like two massive warships, each vying for control over the seas. Nintendo has a smaller ship, yet they can travel where the big ships can’t float, such as those rivers and inland streams.

Now, with the launch of the Switch, Nintendo may as well be an amphibious boat 😛

Anyways, that’s enough of a history lesson, if it can be called that. On to the nitty gritty details about the Switch.

At its very core, the switch is a hybrid game console. It can be played on a TV by using a docking station, or in a portable handheld mode. Using the console in TV mode allows for big screen entertainment, and to charge the console as you play. In handheld mode, you can play the console anywhere you see fit!

The change is very much seamless from TV to portable mode, and vice-versa; depending on your TV’s settings, it may turn on once you’ve docked the Switch. Likewise, removing the Switch from the docking station will display your game on the screen, ready to continue playing.

The Switch has a kickstand which allows for the console to be set down on a tabletop and played with multiple players. It’s a good feature, but I feel that anyone with plans of playing split-screen multiplayer would be better off playing on the big screen. Still, it adds to the portability.

Battery Life: 3 hours of fun. Use it wisely…

For a console promoted as being portable and easy to carry around, this is one concern I have for the Switch, though it is only a minor one. In handheld mode, the Switch only has about 3 hours of battery life, which makes it good for short car trips or flights, but any more than that, and you will need to charge it somehow.

You have to remember that this is still very much a console at its very core; if you want to play games on the move, this is why we have so many mobile games on our smartphones.

Mind the Screen, because it will scratch

Especially on the console dock! Sliding the console into the docking has a very noticeable amount of friction, as if rubbing plastic against a textured surface.

I would treat the Switch just as you would with a smartphone: get a screen protector. As with any electronic with an exposed screen, it really pays to take care of them, and keeping the screen safe goes a long way in preserving the quality of the console.

There are numerous accessories that you can buy to customize your Switch. While Nintendo sells their own official screen protector, it might be ideal to get one that uses tempered glass. I find that this looks and feels the best.

In all seriousness, this is often the case with many new consoles; there just isn’t a wide variety of games available. At launch, the Switch had about 5 games for players to buy in stores, not including games that can be digital downloads. As of writing this post, I think that number has jumped to almost 80. The majority of these games are multiplatform however, which I find is very important to consider.

So far, Nintendo only has about 7 or 8 games that are exclusively Nintendo (ie: Mario, Zelda, etc.) This is another thing to consider, as Nintendo’s flagship games are usually what drive people to buy the console over the Xbox and the PlayStation.

One thing I have noticed at a few of the retail stores I’ve been to; some of the Switch games are being sold higher than the usual retail price of $60. Breath of the Wild in particular was being sold for $79.99!

I’m not too surprised about this fact, considering the nature of the console; they went back to cartridges, as opposed to using discs. Still, anyone with a large library of Wii U or 3DS games may be disappointed to find that they may not be able to bring their previous games back.

I hope that Nintendo plans on introducing some way of getting their Wii U games on the Switch, but it may be difficult. The Wii U’s tablet controller allowed for a second screen, and the Switch just doesn’t have that functionality. Developers would have to do a complete overhaul of their Wii U games to make this a possibility.

All in all, I’d say that the Nintendo Switch is very promising, and it seems that Nintendo is learning from their past mistakes and has taken them into consideration.

Sure, we may not get the powerful graphics seen in the PlayStation and the Xbox, but that’s not what Nintendo is about. While there may be some flaws to take into consideration, the Switch makes up for it with a well built console that does exactly what it says in the commercials.

I’m ready to make the Switch … Are you? 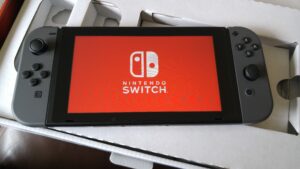