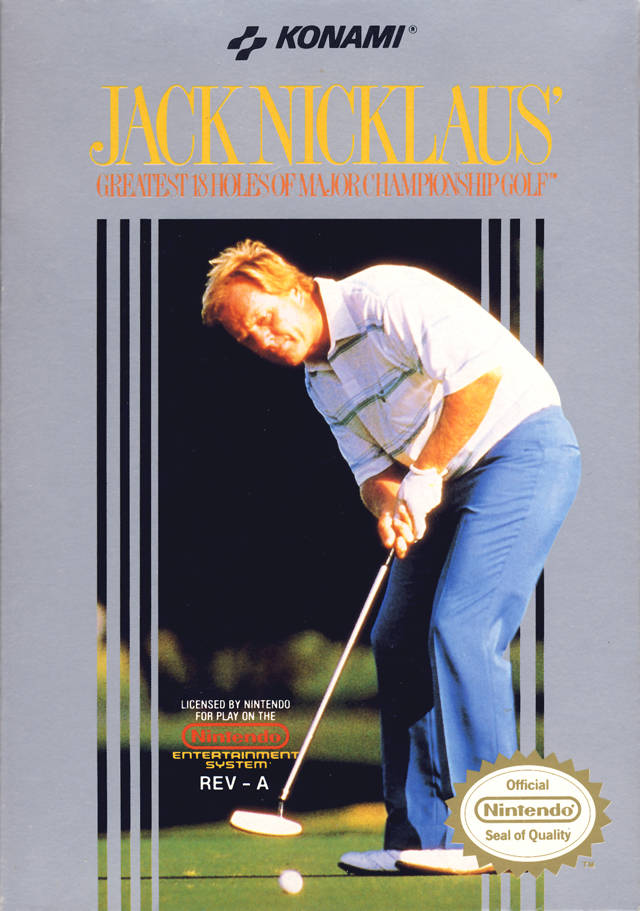 A golf simulation game that was published by Konami back in 1990, this was among the first golf games I have ever played. Jack Nicklaus’ Greatest 18 Holes of Major Championship Golf is a game that, despite its long name, is ironically short. Not to say that it is bad, but once you finish all 18 holes, you are left with not much else.

I found this to be one of those “old grownup games” on the NES. It was one of my dad’s games, and one of the very few games I’ve ever seen him play growing up. I had some great times playing this game with him… when I wasn’t too busy hitting a tree or shooting the ball into a sand bunker.

I could never take this golf game seriously. Or real golf, for the matter (I partly blame Happy Gilmore for messing with my attitude towards golf!). One reason was because of the wacky sound effects of this game. The ptoink! sound the ball made when splashing into the water always cracked me up. I always started snickering when the ball hit the flagpole on the green.

Almost 20 years later, I came back to the game. I blew the dust off the cartridge, and fired up the NES once more to play a game from my childhood.

As far as gameplay goes, i found that this game did a swell job of simulating a real gold game. The game takes into consideration the wind direction and speed, the golf club you are using, plus the power of your golf swing. You can pause the game to get a nice clean overview of the current hole, your location, the green, and everything else in between.

There is little to no audio in the game. The only music you’ll hear is the main menu theme that plays while entering your name. The same track plays in between holes. It’s a catchy little tune, but goes away as soon as you tee off. Once in-game… It’s dead silence. It’s understandable, considering the nature of the game.

One downside to this game is the lack of replay value once you’ve gotten really good at it. There are only 18 holes, which means once you’ve got the best possible score, there’s no more of an incentive to continue. The only other challenge the game provides is the chance to play a round of 18 holes against the Golden Bear himself. In this round, you are essentially playing against a very hard computer player. Pretty much a “final boss”.

This is the kind of game that you’d pick up once every few months to play. It’s an old NES game which may turn up on Amazon if you are lucky, but you’d more likely find it at your local flea market or yard sale. You can expect to complete a round of golf in about less than an hour. However, this game only has 18 holes. Each time you play, you’d be playing the same holes, in the same sequence, each and every time. This is a fun game to pass the time for an hour, but once you master it, the game gets very easy, and ultimately, boring.