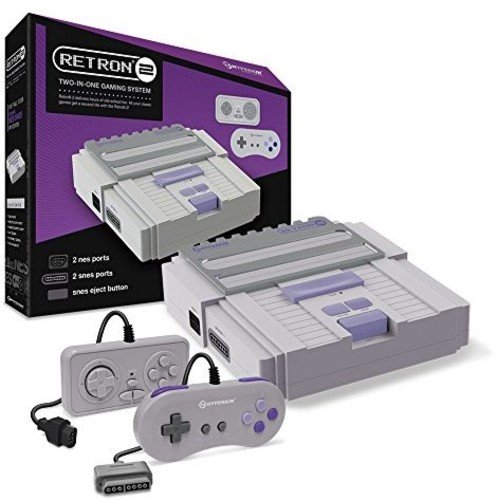 The Hyperkin RetroN 2 is a new Super Nintendo console… Or rather, a more modern built version which plays your original games, plus NES games too! It’s a great 2 in 1 console which runs well.

My Overall Score: 7 out of 10
Where to Buy: Amazon

Ever since I discovered the RetroN 1, I’ve been getting back into old school gaming. For those with a ton of old NES cartridges kicking around, this product does wonders. My only regret with the RetroN 1 is that I found it before coming across the RetroN 2. This beauty of a console looks almost like its inspiration.

What is the RetroN 2?

This is essentially a dual console. It plays both NES and SNES games. There’s not much to really say about it. It has 4 controller ports, two for SNES controllers, and the other two are NES connections.

It also has the RCA analog connectors on the back, so that you can connect it to an old TV. There is also an S-Video port if you need it. A big purple switch on the top lets you choose from NES or SNES, though it does feel a bit flimsy. Apart from the standard power and reset buttons, it even has the classic eject button to pop your SNES cartridge out.

The controllers are very nice and well built. The buttons respond nicely and are comparable to the originals. Of course, if you still have them kicking around, you can always plug them in if you so choose.

For starters, it does exactly what it says on the box; it can play both console games. Every single cartridge you may have in your basement? Fully playable. I’ve heard of some of those “50 games in one” cartridges may work just as well.

One issue I found was the difficulty in pulling the cartridges out of the console. Just like my review of the Retron 1 HD, it’s a tight squeeze, and hard to remove your cartridges. I understand that this could be a design choice, but this can be a concern for some.

Another thing to consider is the overall build of the machine. While it plays games, there’s something about it that doesn’t look very… sturdy. It’s as if someone had put it together in a short period of time.

Another issue I have noticed is that there are a few graphical and audio glitches, especially on newer TVs. The colors may seem off in some games, and other games in which the sound almost felt a bit fuzzy. This shouldn’t detract from the actual gameplay, unless you are really critical about how games sound.

The Verdict: Quantity over Quality

The bottom line is, this console is a good choice for those with both SNES and NES games. If you can get past the possible limitations and concerns about the build, you may have a good console on your hands. It’s not perfect, but with over half of the reviews on Amazon being positive, I think it’s safe to say that customers really like this console.

I hope you enjoyed this review, and if you have any questions about the RetroN 2, feel free to leave a comment down below!