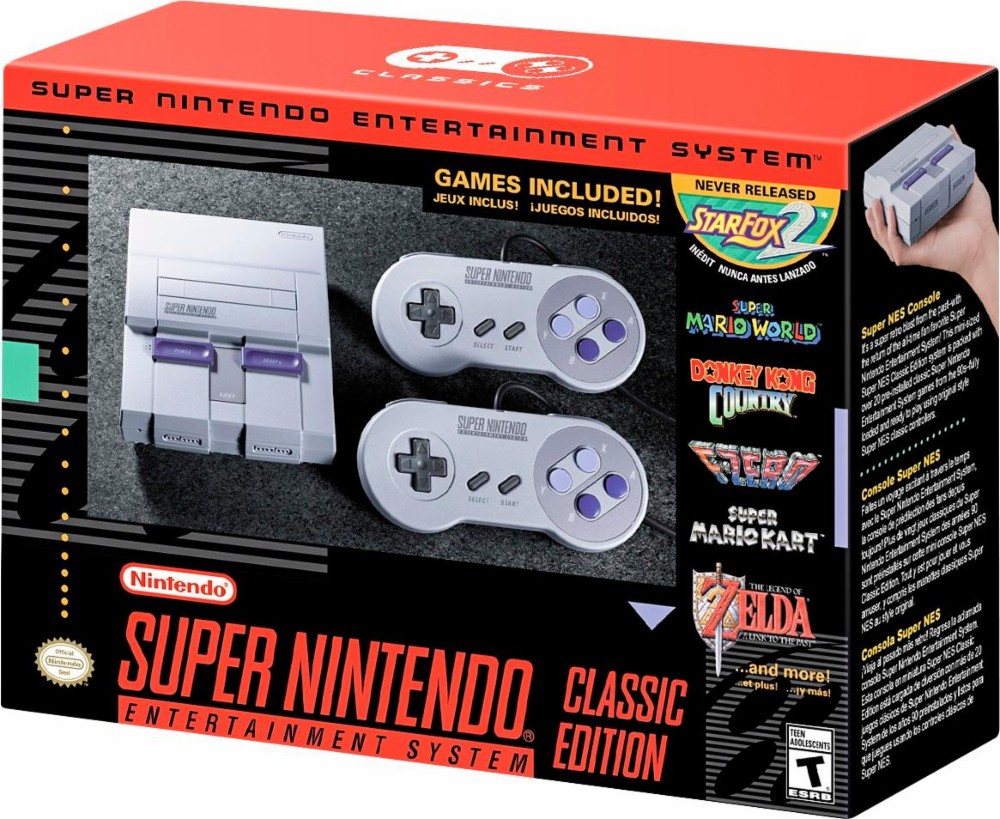 I had a feeling that it was coming, considering the crazy success of the NES Classic Edition, but we now have confirmation from Nintendo that the Super Nintendo Classic Edition is on its way.

The console launches Sept. 29, 2017, with a lineup of 21 pre-loaded games, including one that has never been released before. And based on what Nintendo has announced, they plan on shipping more units than their previous exclusive console.

So, where to pre order the SNES Classic Edition?

In a nutshell, you’ll find links to the SNES below. I’ll update the list as I find more of them.

At the moment, there doesn’t appear to be many retailers out there with a store page ready, which can be a bit unnerving. On a related note, Nintendo’s official page on the product even says “Retailer info coming soon!”

It makes we wonder if they are waiting until later on in the year. Are they trying to prepare? If it is the case, it’s probably going to be chaotic all over again.

Let’s not forget the problems of the NES Classic, and how it sold out almost immediately following its launch. It was in very high demand.

One solution is to closely keep an eye on those links. Considering how quickly the last console was snatched up by buyers, you’ll want to look as those links every day to see when they become available.

Personally, I suggest this: use Amazon’s handy “Email me” button, which will send you an email alert as soon as it is available. This feature is great for those popular items, and saves you the trouble of checking their site every single day.

How much does an $80 console give you?

Apart from the usual power cabling and HDMI hookups, the console ships with 2 wired Super NES Controllers. A nice step up from the NES. I’m hoping that the controllers will have a longer cable.

Having a 10ft long cable would be great for relaxing on the couch, and should help ease the eye strain. Today’s TVs are much larger than the old 90’s TVs we used to have!

What games are included?

Just as with its predecessor, the Super NES comes preloaded with 21 classic games, as seen below:

According to news and rumors all over, StarFox 2 was all ready for launch in 1995, but was cancelled due to the Nintendo 64’s release. A shame, but I suppose Nintendo  had their reasons.

All in all, it looks like we have a pretty solid lineup of games to enjoy when it comes out.

For the same reason I don’t go to stores on Black Friday or the launch day of highly sought after games: the chaos. As much as I love videogames, I value my life a lot more than a game. Plus, pre ordering a game or a console saves some headaches because you’ll know the retailer has your product on reserve.

I remember a time when I preordered Skyrim, perhaps the last time I ever preordered a physical copy of a game before the turn to Steam and digital downloads. I preordered the game months in advance…

When I got to Gamestop after launch, there was still a crazy long lineup of people queued up to buy the game. Shelves were pretty much empty. They had a separate clerk designated for preorders at the time, apparently not as busy as the other line. So, I stepped up, asked about the game I preordered, and after a swipe of a debit card and a show of ID, I left the store with the game in my hand. I didn’t look back, thinking about the number of pissed off gamers waiting in line, and possibly shooting some death glares my way 😛

This little story is one of the big reasons why I suggest pre ordering something if you feel the price is worth buying it at launch.

Now that I think about it, however, this SNES Classic Edition may not present the same case. As mentioned earlier, the big trick here is to know exactly when the pre-orders go live. Having an alert email is the best way for a retailer to tell you when a product is ready.

Is it Worth Buying?

I wish this were an easy answer. The NES Classic was a rare collector’s console, and despite Nintendo’s promises to make this console more available by shipping more consoles, I fear that the SNES Classic is going to go the same route as the NES.

The NES Classic was a love letter to the most die-hard fans of the old Nintendo console. As excited as you may have felt about having that classic controller back in your hands, you’ll need to think long and hard about whether you feel the same way about the SNES Classic Edition.

If you want the SNES Classic for the sake of owning a collector’s piece, I’d say to go for it. Nintendo will likely sell this as a limited quantity product, meaning that they will eventually come off of retail shelves.

If you only want it for the games, I’d advise against buying it; Nintendo has the Virtual Console and the eShop which bring a myriad of classic games to the newer consoles.

If you grew up playing the old SNES, and you have one still stored away, I’d suggest sticking with what you have, assuming that it still works. Nintendo has been known for building high quality products that would make a Nokia phone jealous.

Chances are that if you are familiar with the SNES, you’ve likely owned it or played it at a friend’s house.

But what if you have never played it before?

As mentioned, stick with the eShop; Nintendo has always kept a close watch on their games, and doesn’t easily forget their timeless classics. Nintendo is perhaps one of the few game companies who tend to bring their old games into the limelight for the newer generations, whether in the form of remakes, ports, or digital downloads.

What are your thoughts? Will you buy, or give this a pass? Feel free to let me know in the comments; I’d love to hear your feedback!