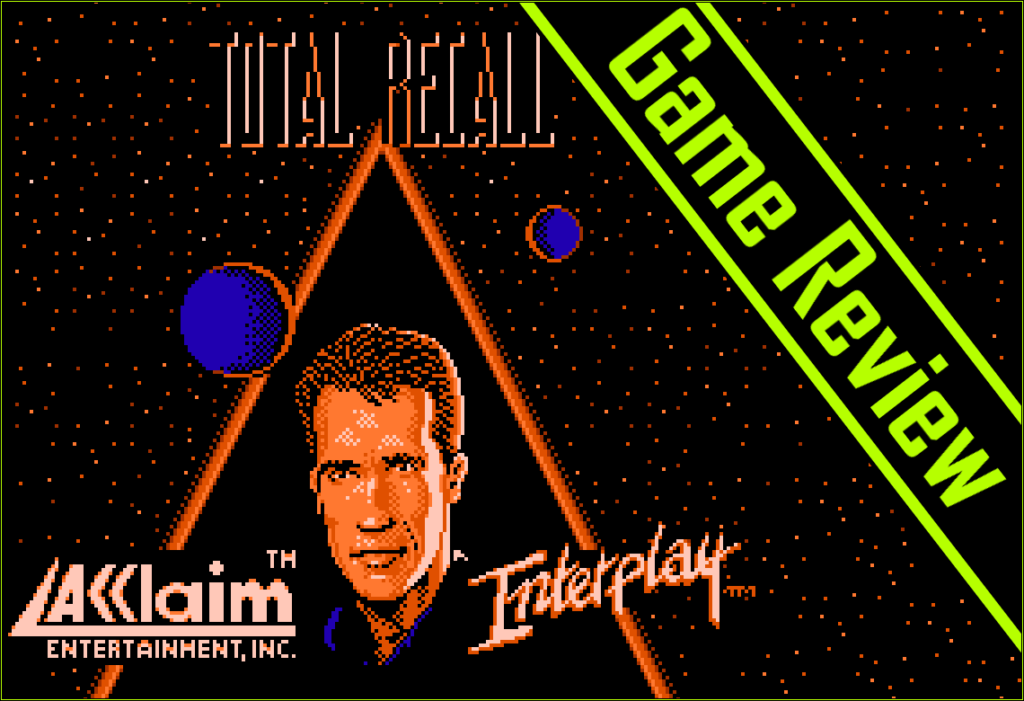 I liked playing Total Recall as a kid. There, I said it.

If you don’t agree with me, that’s totally fine. Everyone has their opinion. Personally, I think there are far worse video game adaptations of movies than this one. Sure, the game is tough and the story doesn’t quite follow the film, but it really is not that bad.

Anyways, let’s get to the review.

I first encountered this game at my aunt and uncle’s place in the early mid-90’s. Apart from my parents, they were the only others in my family who owned a NES. And when you’re a young boy who loves videogames, that meant playing different NES games than what you had at home. If I remember correctly, my aunt and uncle owned Ms. Pac Man, Joust, Monopoly, The Hunt for Red October, and of course, Total Recall. Those last two games, as you might already know, are adaptations from movies. I remember calling them “grown-up” games as a kid, because they were certainly different from anything else I’ve ever played.

I have to admit that I played the game before I ever actually saw the movie. Not surprising, as the movie wasn’t exactly made with kids in mind. That might be one of the reasons for why I enjoyed the game more as a kid. I didn’t have a reference point, so it wasn’t like I had a specific set of expectations going into the game.

Years later as an adult, I did sit down and watch the movie, and I have to say, it is without a doubt, one of my favorite sci-fi movies out there. To be honest, if I watched the movie first and then played the game, I’m sure that I would have had a different experience playing this game.

One of the biggest issues with many video game adaptations of movies is that they tend to stray from their source material. So much so, that the end result is nothing like the movie. This seems to be one of the main issues raised by others when it comes to Total Recall, the game. After all, nowhere in the movie does Arnie battle against trashcan bandits, alleyway midgets, a bomb-throwing old man, hobos, a hat-throwing Oddjob wannabe, skeletons, and crazy Martian cats. The fact that these characters exist in the game can definitely annoy fans of the film.

As a kid, however, all I saw were baddies. Nothing more than simple mooks for the good guy to beat up on his way to the big bad guy. And if you get right down to it, that’s exactly what this game is all about at its core. Douglas Quaid, our hero, fights his way through bad guys until he finally makes it to Mars, fighting even more bad guys, until he finally squares off against the main villain. The game even has a decent ending that reflects what did happen at the end of the movie.

But anyways, I think I’ve talked enough about my personal experience, onwards to the review.

As soon as you power on your NES, you’re greeted with the opening screen, where they tried to make it resemble the movie poster. As far as NES graphics go, they did a somewhat decent job of making a pixelated version of Arnie’s face. Also, fun fact, Interplay Entertainment developed this game. That’s right, the folks who brought us Fallout and Bauldur’s Gate, made this game. Humble beginnings, right?

Anyways, the game opens up with a brief introduction that basically sums up what happens in the first several minutes of the film. You are Douglas Quaid, a guy who always wanted to visit Mars. You visit Rekall Inc, to basically have memories of a Mars vacation implanted in your head. Instead, Quaid gets nothing but memory loss. Soon he finds out that a bunch of guys are after him, and that visiting Mars may be the key to finding out what happened.

And then the game drops you right into the thick of things.

Now, as much as I enjoyed the game as a kid, the experience wasn’t without its flaws. First off, the difficulty. You aren’t given any idea of where to go, and if you don’t have the instruction booklet, no idea of the controls. You also are constantly getting chased by Ritcher, one of the bad guys from the movie; if he touches you, you instantly lose a life, so you aren’t given much time in the start to get used to the controls.

And so, without this rather essential information, you are stuck with learning as you go along. As a result, trial and error gameplay ensues, and it pretty much continues like this until the very end. Since this is a NES game, you have to start the game all over from the beginning if you get Game Over. There is a secret shortcut placed in the game at a rather convenient place that lets you skip the early levels, which is great because some of these levels are brutal. Unfortunately, it only works if you’ve managed to play through these levels in the first place.

The game also likes to throw a lot of baddies at you. Combined with the above points, you are left with a game that is frustratingly tough in the start. The enemies are scripted to respawn each time you switch between screens, so if you are getting chased across a level, you’ll end up with even more guys to fight as they appear.

Another thing: hit detection and temporary invulnerability for baddies. Arnie is a big guy, as reflected in his sprite. So naturally, you would expect his punches to have some reach. Sadly they come up a little short, which makes for some fights that have you taking as much damage as you dish out.

When you take damage, the game grants you temporary invincibility, as is the case in many games. The game also grants this to baddies as well, which means half the time your attacks are not even connecting. This results in some fights dragging on longer, and messes with the overall pacing of the game.

On the bright side, once you get the hang of the controls, get better weapons, and understand the AI of the enemies, you will have an easier time getting through the levels. In fact, you can easily exploit the AI to beat the game faster than you think.

For a game that was released in 1990, the graphics are okay, but also a bit hit or miss.

Despite wearing all green, the developers did a good job of making the player sprite look like Arnie; there’s not a lot of detail though. All of the baddies you fight are certainly unique, but they also come in a simple color scheme. Some of the animations are a bit weird, and some are outright hilarious. The way the cats’ attack animation looks is probably one of the funniest things I’ve seen in this game. In fact, I almost wish I could have seen that in the movie.

The background elements do need some improvement though. The game’s 2D backgrounds and objects are drawn in a “fake 3D” perspective. This kind of perspective would work better in a beat em up game, but since Total Recall is an action platformer, this makes for some clunky platforming moments. There are some times when you have to make a few tricky jumps, and the background makes it hard to tell if you’re going to make it.

The game also has cutscenes throughout the game, to remind you that this is a movie adaptation, and serve as the only source of plot in this game. The cutscenes are, well… it depends on which one you are looking at. They seem to range from comic book style drawings of Richter, to pixelated shots of Arnie wearing a towel, to choppy animations of sprites in general. It feels like they could have made things a bit more consistent, especially with the variety in quality.

Usually, when you play a game adapted from a movie, you would expect to hear some sort of rendition of the movie’s soundtrack, or the theme song, but sadly, there’s nothing of the sort here. Looking back, it’s kind of a let down, because the opening theme of Total Recall being awesome.

Now, when I first played this as a kid, I had not seen the movie at the time, so I can’t really fault the designers too much for their choice of music. But at the same time, I didn’t really have a reference point to go off of, so I had no idea how the music was going to sound.

The music is… confusing, really. It plays as though my own brain is trying to make sense of the plot, piecing it together while encountering a wacky variety of characters trying to kick my head in.

There’s not much for the variety in music. Apart from the opening song in the title, there’s only two other songs that you will hear, depending on how far you are in the game. And they are both very repetitive. They might get stuck in your head.

It’s a game adapted from a movie. That being said, if you’ve already seen the movie, you’ll know exactly how the game’s story is going to turn out.

A lot of people have blasted the game for not having a story that closely relates to the film. While that may be true, these people also seem to forget that the game still manages to get some of the iconic scenes down. We have the scene when Quaid fights his wife. We have the chase scene through the subway and the X-ray security checkpoint. We have the scene where Quaid has the towel around his head. We even have a high speed chase through the streets of Mars, and the showdown with the big drilling machine just like in the movie.

Unfortunately, this is where the movie and the game lose their similarities. From then on, the game doesn’t touch base on the plot of Quaid’s memory loss, and sidelines you right into the final plot shown in the movie. I feel that the designers missed out on an opportunity to place an additional cutscene on Mars, where they tie the plots of both film and game together in a way that makes sense.

I feel like the only ones who could get any enjoyment out of this game are the ones who are willing to suspend their disbelief of the plot, and who are determined to slog through a hard game and make it to the end. I guess I fit that description, and if I had to guess, is likely the reason why I liked this game compared to others. But I won’t deny that there are a lot of things that could have been improved to make this game a far better one.

Thank you for reading.