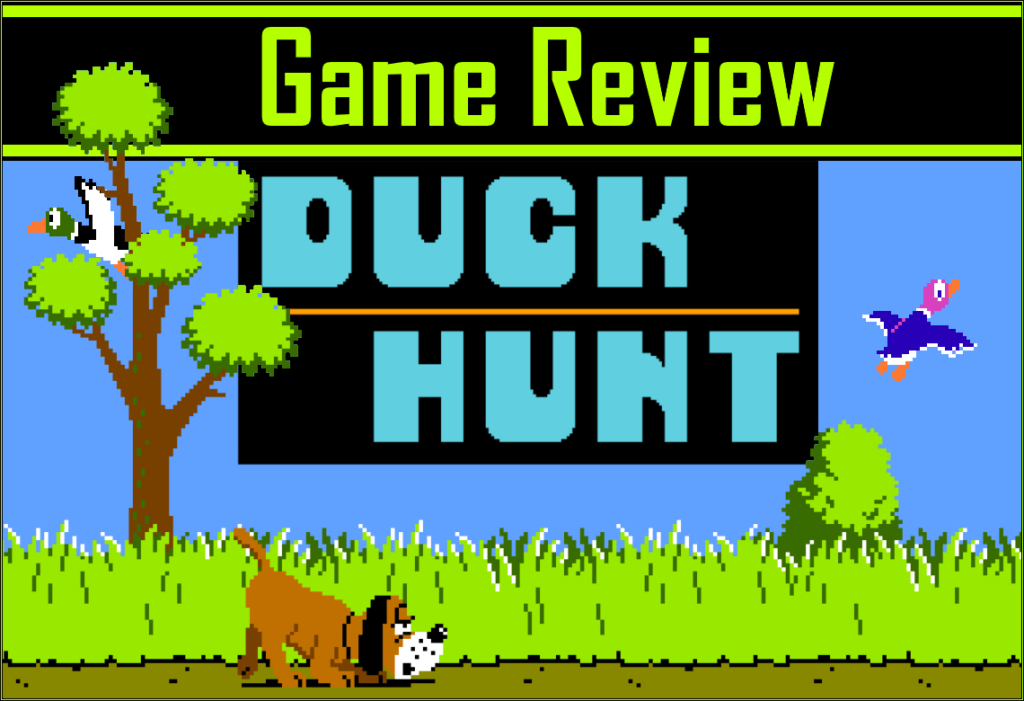 The NES Action Set, released in 1988, was a special bundle edition of the Nintendo Entertainment System that came packaged with 2 controllers, the Zapper, and a multicart of Super Mario Bros and Duck Hunt. As you can no doubt assume, this bundle was perfect for 2-player action.

If you pressed Select, the opening screen would switch between games, and then you could play Duck Hunt instead.

The moment I found that out blew me away. Literally… I had the TV turned up too loud, so when the opening theme of Duck Hunt started blasting into my little ears, I ran screaming from that room as fast as I could. It took a few minutes of peeking around the corner — staring at the TV in case the music started playing again — before I would eventually work up the courage to return to the room, point the Zapper at that screen, and pull the trigger.

… And that was my first impression of Duck Hunt. I have no idea how I managed to remember such a memory. From being scared of theme songs, to growing up and sniping those ducks like a boss, it’s awesome to look back and see how far we’ve grown up.

But anyways, that’s enough storytelling from me; on to the review.

In terms of gameplay, Duck Hunt is as straightforward as it gets. You use the gun to shoot at ducks on the TV screen. That’s it. No fancy features or gimmicks, just you and your skill with the gun.

On the main screen, you have the choice of 3 different game modes. One duck, two ducks, or clay shooting. If you aim away from the screen and pull the trigger, you can select the mode you want. Aim at the screen and shoot to start. It’s a really cool way to navigate a menu. I would think that folks in the 80’s would be blown away too, minus the screaming and running that I did back then.

When the game starts, we see our trusty hound sniffing around for your quacking quarry. A few seconds later, he dives into the tall grass, and the ducks go flying. The hunt begins.

One by one, or in pairs, your dog flushes out some ducks for you to shoot. The ducks fly around the screen in a random and erratic fashion, desperately trying to avoid your crosshairs. You get 3 shots to take down your quarry, until after some time, they fly off the screen… If you haven’t managed to shoot one down in time, your trusty pooch pops up to laugh at you.

And just like that, players all around the world would seethe in frustration of man’s best friend, as he laughs and laughs at your lousy shots with the kind of chuckle that even PETA would find annoying.

And no, you cannot shoot the pooch.

Now, assuming that you are actually a good shot, or sitting 4ft in front of the TV, you get to see the duck get blasted with a shot before falling to the ground with a nice loud thud. Your dog will hold up one (or two) ducks to show you that, despite his constant giggles, he’s still doing the job of fetching those mallards out of the marsh for you. And believe me, walking through a swampy marsh is no simple walk in the park.

Each game consists of a series of Rounds, with each round giving you a total of 10 ducks to shoot. You have to shoot a certain number of ducks in order to advance to the next round; otherwise it’s Game Over.

If the idea of shooting ducks is not your thing, then you can always try your hand at shooting clay pigeons. Because pigeons made out of clay are totally more humane than shooting real ducks; it’s not like those clay birds have any feelings or ill will towards us. At least you don’t have the dog here to laugh at you when one gets away.

All joking and snarky comments aside, I found that the clay shooting mode is a lot tougher than ducks. The clay pigeons move fast, come in pairs, and the further away they are, the harder it is to get a shot. And as the rounds get higher, the faster the clay pigeons move. You’ll need to have a quick trigger finger.

There’s only one con to Duck Hunt, and to be honest, it is not a fault of the game, but the way technology has evolved over the decades. Newer HDTVs have replaced CRT sets as the mainstream television in the average household. The NES Zapper is only able to work on the older CRTs, which makes the accessory obsolete. At this point, the game may as well be a collector’s item.

Thankfully, there is some good news; it seems that there is a company that has been trying to make a light gun accessory that can actually work on newer TVs. Hyperkin is a company known for making third party game consoles and accessories, and they look to be the ones behind this news. I might look into this new light gun, and if I like how it works, I may write up a review.

So in conclusion, Duck Hunt is as straightforward as it gets when it comes to shooting games. You use the gun to shoot at ducks. That is exactly what this game accomplishes. There’s no intricate mechanics, and despite that annoying dog, Duck Hunt has a charm that really takes you back to a time when games were simpler in design.

Thank you for reading!