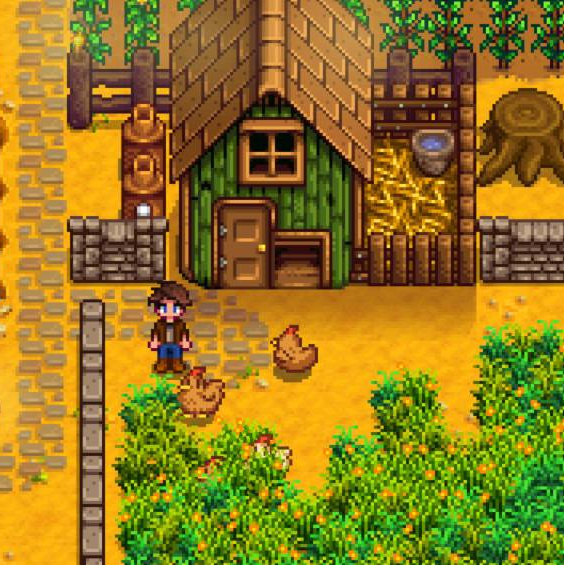 I love chickens. Perhaps way too much, so it came as no surprise to me that when I started playing Stardew Valley on the Nintendo Switch, I immediately tried getting enough money to build a coop, and start raising chickens.

I’m going to tell you that I made a big mistake in doing so. There are a lot of mistakes that were made in my first year that revolved around chickens.

In this post, I am going to discuss some helpful tips to raising livestock in a coop, as well as some of the important things to consider before making the commitment. Hopefully this will save on many headaches down the road. That being said, read on for my Stardew Valley guide to coops.

Livestock is a long-term investment

This is one important thing to consider before you even get started. It costs a lot of money and resources to raise livestock, especially in the beginning. Resources are few, and your first seasons are better off spent in making money through crops and fishing.

You will not see a very big return on investment until your animals are happy and producing on a regular basis. Building a coop costs 4000g, plus 300 Wood and 100 Stone. Even after this expense, you will still have to pony up 800g to buy a chicken from Marnie’s Ranch.

A lot of new players make the mistake of trying to raise animals before they even got a farm up and running. What results is a great big money sink if they build a coop. One chicken egg will give you 50g for each one you sell. That’s not a lot of money. Sure, it will cover the cost of one single parsnip, but you will need to have collected about 80 eggs in order to pay for the coop itself, not including each individual chicken.

The key is to have accumulated a lot of resources over the first two seasons, until you’re sitting on some money and can afford to build one in the fall.

Once you get the hang of it, you will start to have money in no time.

Don’t cut all of your grass!

One of the big mistakes I made when I first started playing the game was clearing out everything on my farm. I then had loads of space to grow crops, which is great. However I wanted raise chickens, since I love them so much 🙂

Unfortunately, I made the mistake of cutting away all of the grass that was growing in my overgrown fields, and it wasn’t until early summer that I realized that the chickens needed to eat. Since I had no grass, had to continuously buy hay from Marnie’s Ranch just to keep them fed.

Don’t make the mistake I made first starting out. Try to avoid cutting that grass until you have a silo. Sure, the grass will grow back over time, but every bit you save will net you more hay in the long run.

When I first started playing Stardew Valley, I followed the quests that were provided to us in the beginning. Of those few quests was the one that involves building a chicken coop.

By building a Silo, this allows you to automatically harvest hay as you cut grass. It’s also good to because it won’t make you waste any of that grass if you accidentally cut some away.

Don’t forget to feed them!

Another mistake I made raising chickens was assuming that they automatically eat while inside the coop. It turns out they don’t!

Inside your coop, there is a small trough, called a hopper. It has some hay sticking out of it. If you press the action button while next to this, you will collect four pieces of hay from your silo. You can then place these pieces of hay on the bench next to the hopper, where your animals will be able to eat.

In the warmer seasons, chickens will be able to roam around outside and eat grass, free-range style. Keep the small door open in the front, and your chickens will automatically go in and out as needed.

Remember that chickens will only produce eggs as long as they are fed and happy.

Build a “silo” inside a coop

Coops act as storage sheds in their own right. You can build a chest and place it inside the coop. If you walk over to the hopper and press the activate button while holding a tool you will collect hay from your silo. You can then place the hay inside the chest for easy access later. It’s a great way to save space on your land and also provides handy storage place inside your coop, especially if you want to keep your animal products separate from your crops.

Keep in mind that this trick only works if you did not already feed your animals. Otherwise, you cannot remove any hay from the hopper.

Bring on the Money- I mean Mayo!

Eggs on their own won’t net you a massive income. They only sell for 50g at minimum. Sure, they can be eaten, or used in cooking, but there’s another profitable activity you can use them for: making mayonnaise.

By putting one single egg into a mayonnaise machine, you’ll get one jar of mayo after about 3 hrs of in-game time. These items sell for 190g each, more than 3x the value of one single egg.

With enough time and eggs, you’ll have a very nice pile of money from mayo!

I hope that this information helps you in your chicken coop endeavors. Feel free to browse the site for more guides on Stardew Valley!