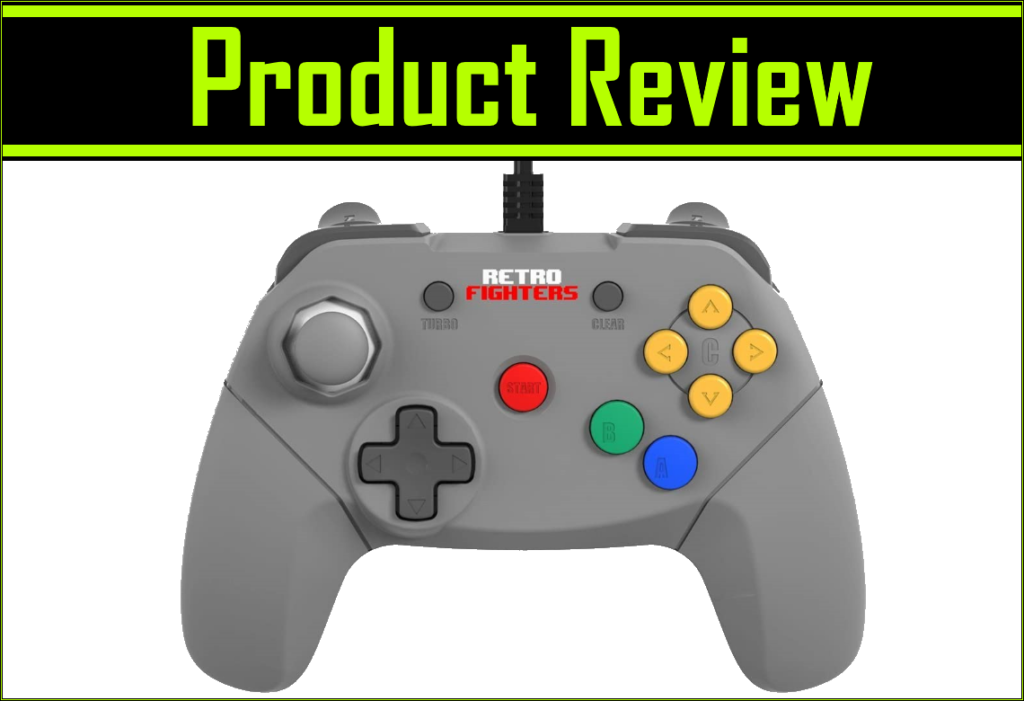 When it comes to finding the ideal N64 controller, the Retro Fighters Brawler64 is exactly what I had in mind. Ergonomic and responsive, this one checks all of the boxes for a modern day console controller.

Manufacturer: Retro Fighters
Where to Find: Amazon
My Rating: 9 out of 10 – Recommended

Not going to lie, it feels weird writing up a post just after Nintendo makes an announcement to bring Nintendo 64 games to the Switch’s online gaming service.

In this day and age, we are seeing a massive number of older games being made available to play on modern consoles. Nintendo Switch Online is essentially the “Netflix” of Nintendo gaming. For the low price of $4 a month, you get access to hundreds of old classics curated by Nintendo themselves, along with special offers and exclusive games.

But just because Netflix (or any other streaming service, for that matter) is around, doesn’t necessarily mean that Blu-rays and TV box sets are obsolete. There’s always going to be a community of old school folks who will keep physical media alive, myself included.

Anyways, I went off topic. On the subject of Nintendo 64, there are still loads of people that continue to play the beloved 64-bit console. As a result, it has been harder to find any secondhand controllers in decent working shape.

It’s likely the reason why Retro Fighters had a lot of success when they announced the Brawler64 back in 2017 for Kickstarter. This controller is a third party controller designed by fans of the N64, and was essentially a humble attempt at providing a modern-day controller for the older console.

If you really want to get the most out of your gaming, you’ll definitely want to invest in a good quality controller. Here are a few things to know about the Brawler64.

The Brawler64’s claim to fame is a completely redesigned controller with next-gen features; to put it simply, the controller boasts all of the things that come standard in a controller these days, such as:

To be honest, I feel as though I described every single controller out there, which is the point. Ever since Microsoft smashed the competition with their Xbox 360 controller, almost every controller these days has tried to replicate the same look, feel, and button layout that the controller featured.

As much as I enjoy the nostalgia of using Nintendo’s classic controller, the three-handled design just hasn’t aged very well. It may have been creative for its time, but to be frank, you cannot use all of the buttons in a comfortable way, which really is a major inconvenience when compared to its competitors back in the day.

The Brawler64 looks and feels just like the Nintendo Switch Pro Controller, so if you are used to playing on the Switch, you’d feel right at home with this one.

(On a side note, if Nintendo Switch Online doesn’t let you play N64 games on the Pro Controller, that would be a major deal breaker in my opinion)

Just like the official controller, the Brawler64 has a cable connection built to fit into the control deck or the N64. In fact the cable is significantly longer, at 10 feet. The cord’s connector at the end is quite tight-fitting, however.

I should add, in case it wasn’t obvious, is that this controller was designed to be used on the Nintendo 64, so it doesn’t have an additional connection that allows it to hook up to PC. On the bright side, if you have a N64-to-USB adapter, it can be used on a PC if you’d rather use emulators.

Also just like the original, the Brawler64 has a port on the back that lets you hook up your Rumble Pak and your Memory cards. It is not able to use the Transfer Pak, so if you only enjoy playing Pokémon Stadium, then this controller may not be ideal.

Not gonna lie, the button layout pretty much remains unchanged. Apart from the two-handled design, some of the more glaring differences here are the relocated D-pad and the larger C-buttons.

The original Z-button has been designed as two trigger buttons, both of which are situated on the back of the controller, just behind the L and R buttons. They are both mapped to the same function, so you cannot make them perform separate controls.

Special mention should be made for the redesigned joystick, because it is both better and worse than the original controller, depending on your perspective. You see, the original N64 controller had a design flaw in the mechanism for the joystick’s movement. Over time, with regular use, the plastic gears in the joystick’s internal parts would gradually wear down until the control stick would start to feel wobbly and eventually, unresponsive to sensitive controls. The Brawler does away with this and has a more modern-made joystick that can handle lots of wear and tear.

With that said, what makes the Brawler64 “worse”? The joystick mechanism is far more sensitive than the original, which makes playing shooter games that require precise aiming to be a lot harder to accomplish. This seems ironic, considering how many shooter games these days are being played on controllers that look like this one.

Is it worth the Price?

That depends on how far you are willing to take your retro gaming hobby. Buying a new controller is probably the most straightforward solution as opposed to repairing your aging controllers. When I looked around, the Brawler64 seems to be a little more expensive than other options out there, but you do get a good modern day solution for an aging controller. If money is not an issue for you, I’d suggest getting this controller, but otherwise, you’d be better off getting a cheaper alternative.

All in all, I found this controller to be a really good replacement for your older N64 controllers. It has all of the comfort of a modern day controller, and it definitely does its job just as well as the official, if a little bit flawed in some parts. Nevertheless, it is a third party product, so as with any of these, your mileage may vary.

I find that this controller is ideal for those who are just looking at getting a better quality replacement controller. As of writing this, there are 560+ positive reviews on Amazon, so I think it’s safe to say that many gamers really enjoy using this controller.

I hope you have enjoyed my thoughts on the Brawler64 controller. If you have any questions, feedback, or requests, feel free to let me know in the comments below!