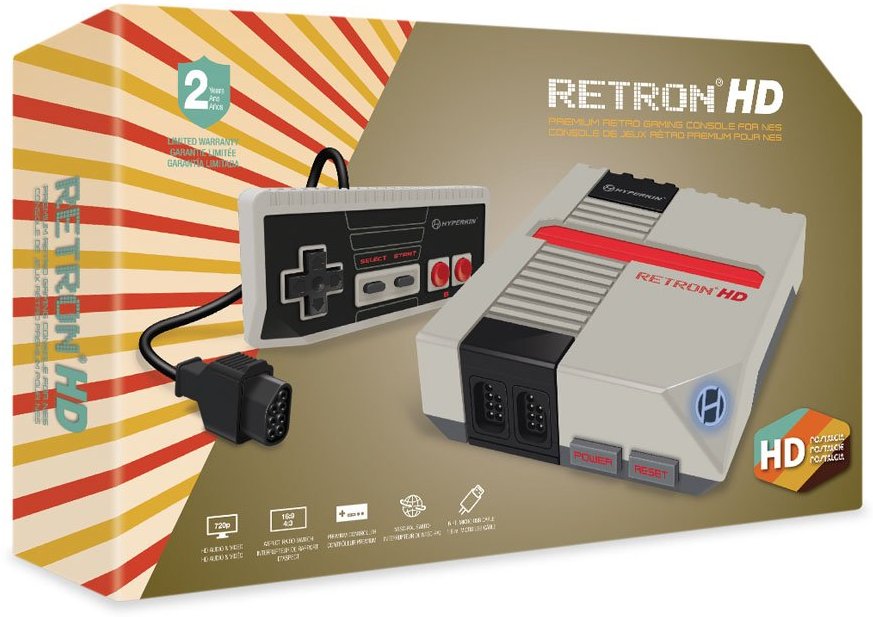 It was sad to see Nintendo pull the plug on the NES Classic Edition not even a year after its release to the public. Apparently, Nintendo did not have long term plans for the mini console. And so, the only way anyone is going to find the console is on eBay with crazy prices marked up well beyond their worth.

Thankfully, that hasn’t stopped various companies from producing their own alternative to the NES Classic. Trust me, you’ll want to give it a pass once you’ve feasted your eyes on the fancy console herein…

The RetroN 1 HD is a $40 game console whose design looks more or less like a contemporary version of the original NES. If 8-bit video game consoles were never invented until today, I imagine that this is what they’d look like.

Take a look at that controller! It looks almost exactly like it did back in 1985, although with a slightly angular look. The cool thing is your old 80’s controllers will still fit in the slots. An even better advantage over the NES Classic Edition, is that the RetroN’s controller cable is a whopping 10 feet long. This is very significant when it comes to gaming on the couch.

The NES Classic had a 3 foot long cable, which really doesn’t make it a very viable option. You would have to set the console on the coffee table in order to not strain your eyes sitting too close to the TV. Of course, having an HDMI cable lying across the floor opens the way for accidents waiting to happen.

For myself, the selling point is not just the cheaper price tag of $40, but also the idea of the console being able to upscale the display of the old games.

What is upscaling? Simply put, the console is able to convert the display from standard definition (144p-480p) into high definition (1080p).

Think of it as playing a plain DVD on a 4k HDTV. The larger resolution screen allows the video to be formatted to fit the screen.

All that said, this new console should make the picture quality look cleaner and crisper on your NES games.

What’s in the box?

At a glance, here is what I know so far:

As you can see, it comes with everything you need to get it working on your TV, both digital and analog. It’s a good touch, adding the AV cables. Probably much better than the old RF cable switches that had you change to channel 3 or 4 to play!

Play all of the NES Games! No pre-installed games!

The biggest difference between this console and the NES Classic edition is the fact that this console will play every single NES game out there, including from other regions (NTSC and PAL). I highly doubt that it could play the Famicon games; it was a different console than the NES, after all.

The RetroN 1 HD does not come with any pre-installed games, unlike the NES Classic Edition. Sure, it may sound bad, but let’s be real: you probably have some old NES cartridges stowed away in the basement, am I right? Even if you needed to grab some, you’ll have trouble finding what you need on Amazon or on eBay. You could always check your local flea market for some awesome deals.

When is it coming out?