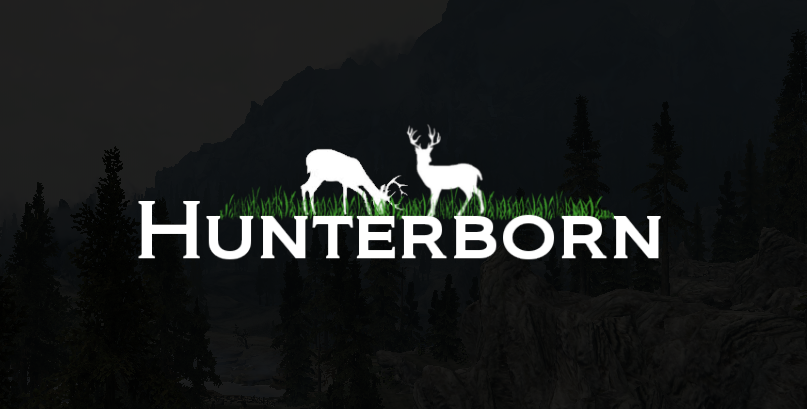 In this post, I discuss the fun things to do playing the role of a hunter, and how this mods amps up the fun factor.

I was shipwrecked in the Sea of Ghosts. With most of my strength, I managed to make it to shore. I had little to wear, and the bone chilling waters of the ocean had sapped me of all energy. Solitude was too far away to make it on foot. Strange, considering how close it seemed to look with the buildings sitting atop the cliffs overhead.

I made a fire and set up camp using a ragged sailcloth from the wreck. The makeshift tent provided some cover from the wind, and the driftwood along the beach helped fuel the fire. I seemed to have everything I needed… until my stomach grumbled.

I looked around; no animal in sight! I had no fishing pole, and I was not about to jump in the water again. I set out along the coast. I must have been a while until I came across a small pack of Frost Wolves feasting on a dead Horker. Using my single iron sword, I was able to kill the leader while the others fled.

I dragged the wolf carcass back to camp. After a few hours, I used my knife to carve the pelt of the body. Despite a few cuts and stains, it was reasonable in good shape. While my fire was still burning, I cut a few ribs off the carcass, and cooked them over the hot embers.

The next morning, I set out towards Solitude with enough food to keep me going for the rest of the journey.

Hunterborn is an immersive mod which bring a whole new degree of realism to Skyrim. As you may have read above, this mod, when paired with the likes of Frostfall and iNeed, can make for a fun and exciting survival playthrough.

Before Skyrim Special Edition was out, I was playing my original Skyrim game with this mod. Now,  after several months, the mod has finally been released on the Special Edition! Now, console gamers will soon be able to partake in the fun of working for your meat and hides!

But first, some kudos! The mod was created by two mod authors from the Nexus sites; originally by dragonsong, until the work was continued by unuroboros to date. Full props to these two modmakers for their hard work.

Hunterborn changes the simple routine of kill-and-loot on animals into something more immersive.

In a nutshell, this mod adds a new looting system to all of the animals of Skyrim. Remember when you could kill a bear and take a pelt of fur off its body? You press A or X. Fairly straightforward and simple. In less than half a second, you now have meat and hide from an animal. Sounds totally realistic… Right?

Truth is, skinning an animal takes hours of work in real life. Butchering meat takes just as long if not longer, depending on one’s skill. Those hunters out there work hard to bring home food for the table.

How the Mod Works

The mod begins from the moment you try to activate an animal corpse. Instead of the usual inventory window, you will have a message box which will prompt you to choose an action:

Sometimes, there are mods which make changes to a monster’s loot list, and so Manual Loot allows you to open the inventory of the creature as you normally would. The other two options are what bring Hunterborn to the table. Picking up a corpse will allow you to carry your kill in your inventory, so that you can skin it later…

Field Dressing is when you ready the corpse for skinning, harvesting, and butchering. Depending on the animal you kill, you’ll collect pelts, feathers, meat, tusks, even eyeballs for alchemy! Each of these actions will take some in-game time, so as to add to the immersion.

In addition to the new looting mechanic, Hunterborn adds new Hunting Knives which help you skin your kill faster and more effectively. They also let you harvest more items from a carcass. As with the usual setup of weapon quality, the hunting knives range from Iron all the way up to Daedric, but each knife has their own advantage to using them. Some are better at skinning, while others are good at butchering meat, and so on…

In the unmodded game, when you kill an animal, you typically get 1 or 2 meat items from looting them. With Hunterborn installed, you will now obtain a larger bounty of meat from a carcass, which makes a lot of sense from a realistic perspective. The next time you manage to kill a mammoth, you will obtain a ton of meat. A good thing too, since the mod also adds a ton of new cooking recipes that you can use.

One of the cool things I like are the Hunter’s Cache items you can obtain. They are simply a container that you can store loot without worrying about losing your items. This is great for those who wish to store all of their loot in strategic places without having to be bogged down all the time with junk.

Why Should you use this Mod?

This mod is for those who wish for a far more immersive experience while playing the game. Those who are more interested in casual gameplay may not find much fun in this mod. But for those who do, they will find that this mod adds a bevy of new things besides the looting mechanic.

One of the best things about using Hunterborn is how easily it compliments other “survival” styled mods out there. The mod author has done a lot of work to ensure that they are compatible with these kinds of mods.

All in all, Hunterborn seamlessly inserts itself into the game, without interrupting the flow of gameplay. If you like to hunt animals, you will no doubt have a lot of fun with this one!

Where to get the Mod

The mod is found on Skyrim Nexus. The Special Edition version is found there as well. I haven’t found any news as to whether of not the mod will be released onto the consoles yet, but if I find more information, I’ll be posting it here!

[Update: Looks like Hunterborn is available for the Xbox One, but not for PS4, unfortunately]