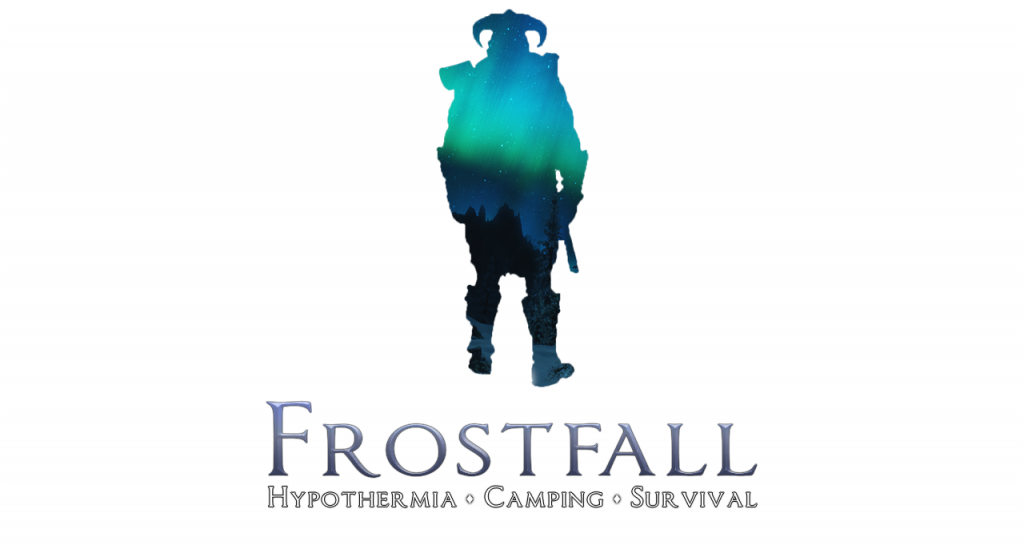 It was late evening. I was hunting Horkers off the icy coast of Winterhold. After filling my bags with meat and tusks, I was ready to head back to town when a fierce blizzard blew in. The weather was so blinding, that I could barely see where I was going. The air was frigid, and I was starting to move slower as my bones started to freeze.

I took shelter underneath a large overhead glacier. Using some firewood I had in my pack, I started a fire to get warm… But without a proper shelter to trap the heat, the warmth was faint. Luckily, I had some camping gear. After some time, I had a small fur tent set up with a cozy sleeping bag. It took about an hour, but eventually, the tent warmed up enough to last the night. The next morning, the blizzard had passed, so I was able to safely make it back to Winterhold.

The above scenario describes one of the many experiences I’ve had while using Frostfall.

Frostfall is a Skyrim mod that truly adds to the immersion of the game, while adding new gameplay mechanics. The mod was created by Chesko, a veteran modder in Skyrim’s modding community. This mod changes the feel of the game, and drastically changes the way you play.

What does the Mod do?

This mod makes the harsh climate of Skyrim more realistic. Cold weather is now something that you actually have to take into consideration when travelling. The same can be said for rain.

As you travel, you will get gradually colder as time goes on; how cold you get depends on what you are wearing, the kind of weather, whether or not you are soaked, etc.

As you get cold, you will start to have negative effects applied to your character. The colder you get, the more severe the penalty. For example, being Chilly will have a slight reduction to your Health, Magicka, and Stamina regeneration. Freezing, on the other hand, is far worse, and you will have a reduction in your movement speed.

There are lots of ways to stay warm, and honestly, it all comes down to common sense. If you have a piece of armor adorned with fur trimming and covers all of your body, it will be far better at trapping heat than, say, a suit of Hide Armor, which leaves the legs, arms, and stomach exposed. Those Fur Armor sets worn by bandits now become a viable piece of armor while exploring.

The mod also adds a new skill and perk tree to the game. The Endurance skill increases as you brave the cold, and as you level it up, you get to spend points to get new perks. These perks allow you to better combat the cold. This skill is implemented through Chesko’s standalone mod, Campfire.

New Spells for the Wandering Mage

Mages don’t typically wear armor since it hinders their ability to use spells effectively. As a result, they miss out on the exposure benefits from wearing armor.

Frostfall adds about 13 new spells that are geared around survival in cold weather. From warming your body with firewood, to blasting foes with steam, each of the spells have been carefully balanced so as not to make them too overpowered.

“Hail, Summoner! Conjure me up a warm bed, would you?”

The spells can be purchased from mages, or you can find the spellbooks hidden around Skyrim.

Why should you use this mod?

Now I know that some people are going to say, “this mod isn’t for me, since it makes the game harder. I’m going to have to micromanage everything I do.” Truth is, the mod author has gone to great lengths to ensure that the game doesn’t become tedious, and does so without even breaking the immersion. The mod comes with an in-game configuration menu which lets you customize each feature to your liking.

This mods is great for those who wish to have an extra challenge in their game. This mods really changes the way you approach a situation. The next time you approach a shipwreck, you will be very careful where you step, lest you fall into the icy water.

The best thing about this mod is that it gives you a great incentive to use other “hunter-styled” mods. Mods such as iNeed and Hunterborn become a lot more viable and a ton of more fun to use.

Where can you find this mod?

Frostfall is available on Skyrim Nexus. The Skyrim: Special Edition version of the mod can be found on the Nexus as well as Bethesda.net.

If you own an Xbox One, you can find it here.

It should be noted that you will require Campfire, a standalone mod by the same mod author, so make sure to install that too. Otherwise, Frostfall won’t work properly.

Anyways, that’s about all I have for now. I look forward to writing more about other awesome mods at a later date. If you have any requests for specific kinds of mods, feel free to leave a comment down below. I always appreciate any feedback. Until next time,

You are now prepared to face a colder, harsher Skyrim…