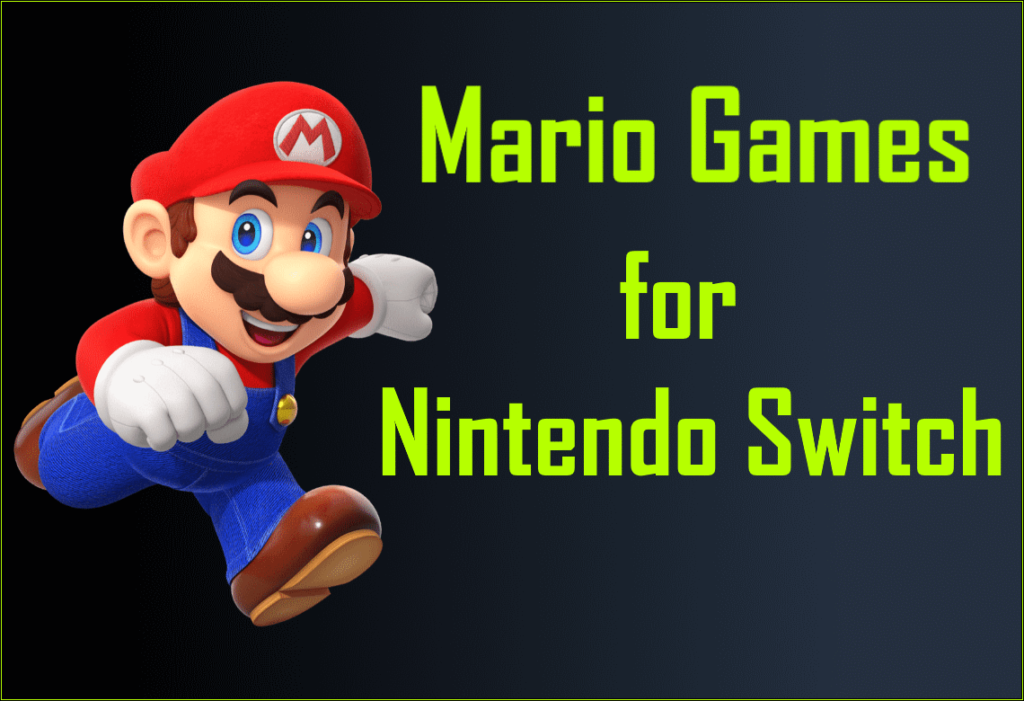 I love Mario games. From the moment I was old enough to pick up a controller, it was among the first video games I ever played, and no matter how many years go by, it will always have a place in my heart.

A while back, I wrote an article on Zelda games, so it seems almost criminal not to write one based on one of Nintendo’s classic franchises! That is why for today, I will be going over a list of the Mario games on Switch.

The Nintendo Switch, as you probably already know, is a hybrid gaming console that lets players enjoy their favorite games on their TV or on the go in handheld mode. Ever since its release in 2017, the Switch has seen a constant stream of games launch on the platform, including a number of entries in the Mario franchise.

Mario is one of the most recognizable and beloved video game characters of all time. Created by Shigeru Miyamoto, Mario first appeared in the 1981 classic arcade game, Donkey Kong, where he was originally named Jumpman! He went on to star in his own series of games, starting with the 1985 release of Super Mario Bros. on the NES.

Since then, Mario has been featured in over 200 games across a wide range of platforms, and in a few years, it will be the 40th anniversary of Mario!

I could go on forever talking about the history of Mario, but that is a post for another day. If you came here for a list of Mario games, feel free to keep scrolling down for each and every one available on the Switch, as of writing. This list will not be in any particular order, because personally, I find all Mario games to be the best at what they do!

If you’d like to know more about the Mario series, I might add more information later on, as time permits. Feel free to check back on this list for any updates!

Let’s start the list off with one of the first Mario games to release on the Switch. Released back in 2017, this game is an open world 3D platformer that plays a lot like Super Mario 64. You explore a number of worlds collecting coins and collectibles while stomping enemies along the way.

One of the newest features is Mario’s new partner, Cappy, who allows Mario the strange ability to possess and control a wide variety of different characters and objects.

This is a remastered version of the popular Mario Kart 8 game, which originally released on the Wii U. Much like the past Mario Kart games, you get to race against other characters from the Mario universe, and Link, for some reason. Using the iconic power-ups from bananas to blue shells, you can gain an advantage against other players. One thing I liked was the “auto-race” feature, which allowed me to play the game with my fiancé’s young nephew, who otherwise was still learning how to play games.

The Switch version includes all of the DLC tracks and characters from the original game, and probably the best Mario Kart game yet!

To celebrate the 35th anniversary of Mario, Nintendo had released a collection of 3 games from the “3D” era of Mario: Super Mario 64, Super Mario Sunshine, and Super Mario Galaxy. All three games have a noticeably higher resolution and better visuals, and were reworked to be compatible with the Switch’s controllers. To be honest, I missed out on the hype of Galaxy, so I’m glad I ended up getting one when they were in stores.

Sadly, Nintendo has pulled the game from their digital stores back in March 2021, so the only way to find one now is through retailers and third party sellers.

I think Nintendo found a new goldmine when someone came up with the idea of this game. Instead of Nintendo making levels for you to play, they gave the entire Mario fanbase the means to make their own levels to share and play. It’s as if Nintendo is Tom Sawyer, getting paid by us to do the work of making our own levels instead!

Joking aside, if you are a huge fan of creating anything you could possibly dream of, or perhaps are an aspiring game designer, then this game serves as not only a form of entertainment, but a way to get some experience in level design. By sharing your creations online, you can get some really good feedback.

Originally launched in 2021, this game, much like every single Mario Party title that came before it, features a collection of minigames that can be played with friends and family, either on the TV or in tabletop mode. One of my favorite features is the fact that you get to practice the controls of each minigame before actually playing. Which is great up until I lose to the computer out of some really bad luck on my part!

Don’t let the name of the previous entry on this list confuse you! This is another new game made for the Switch. But unlike the last title, this game was made as a love letter to those who enjoyed the older games. Launched in 2021, Mario Party Superstars features 5 game boards remade from the original trilogy of Mario Party games on the N64, and now features 100 minigames from all across the entire series! It’s a really nice homage to some older games that not many can play anymore.

This is a remastered version of the original Wii U game, New Super Mario Bros. U. It includes the original game as well New Super Luigi U, so if you missed out on the year of Luigi like I did, you’ll finally get to enjoy this classic. Much like the original New Super Mario Bros, this is a 3D side-scrolling platformer that pays homage to the classic 2D platformers; play as Mario, Luigi, and other characters as they jump and run through a variety of levels, using brand new power-ups to stomp baddies and collect coins.

I have to admit that I missed out on a lot of Wii U titles. Which makes me all the happier that Nintendo has re-released Super Mario 3D World on the Switch. But unlike the original launch of the Wii U title, the Switch version features a new game packed: Bowser’s Fury.

Bowser’s Fury is an all new open-world game made specially for the Switch. Much like past 3D games, this one has you going around and collecting things. But unlike past games that have Mario confronting Bowser at the end of a big castle, this game has the constant threat of Bowser looming over you. Every few minutes, he attacks, transforming the open world and making it harder to beat the game.

Nintendo has a strange and unique way of implementing Mario into various sports, and tennis is no different. From golf to racing, our favorite plumber has pretty much done it all! In this game, players can take on the computer or other players in singles or doubles matches. The game also features a story mode of all things, where players can travel to different locations, unlock new characters and earn abilities to use in the game.

Ok, so maybe this isn’t a Mario game, per se, but it does have the plumber in it! This crossover fighting game features dozens of characters from various Nintendo franchises, who all fight against each other in battles. The game features a wide variety of game modes, including a story mode, as well as a huge selection of characters, stages, and music from throughout gaming history.

Once again, we have another sport that gets the Super Mario treatment, and as always, these games just end up being hundreds of times more fun than the actual sport! In this case, Mario and friends are hitting up the green to play a few rounds. Remember, it’s all in the hips… All in the hips…

If you’ve played past Paper Mario games, then you can expect a similar premise; an action RPG featuring a humor-ridden story with fourth-wall breaking dialogue. In this game, our paper-thin protagonist of the Mushroom Kingdom comes face to face with a new threat, an evil king made of origami paper, who is determined to “fold” his enemies and remake the world in his own image.

Does it count if I add this one to the list? Sure, you don’t actually play as Mario himself, but we gotta show some love for his younger brother. In the third installment of the Luigi’s Mansion series, Luigi once again has to set out and save his brother from a bunch of ghosts. Unlike past titles, Luigi has a new body double, Gooigi, who helps him solve puzzles and bust some ghosts.

I find this game to be a lot of fun and a great way to introduce kids to horror games, although horror is putting it lightly. This game has way more funny moments than scary ones, and if you were a fan of the Ghostbusters movie, you might enjoy the premise of this one.

Here is a crossover I never knew I needed; Mario meets the videogame industry equivalent of the Minions. Honestly, I have no idea how the people at Ubisoft managed to convince Nintendo that this would be a good collaboration. But the truth is, it works. It just works. It also features the music of Grant Kirkhope, the man behind the Banjo-Kazooie music.

At its core, this is a tactical shooter aimed at kids. Unlike the more mature gameplay elements found in games like XCOM, this game sticks with keeping the strategy to simple combat mechanics that anyone can pick up.

Once again, Mario finds his way into a new sports game… Or shall we say, the Olympic games! While not the first game to feature Mario and Sonic competing to take home the gold, this is a fun way to enjoy some friendly competition with friends in a style similar to Mario Party.

If you have a Switch Online subscription, you will have full access to a curated list of NES, SNES, and N64 games, some of these are classics such as Super Mario Bros, Super Mario World, and Dr Mario. These games play just like their old retro counterparts, with the added feature of being able to create a save state, allowing you to rewind missed jumps and retry without having to start all over again.

Perhaps one of the more interesting takes on an augmented reality game, this lets you literally bring Mario Kart into your home. By means of a remote controlled kart and well-placed gates, you can turn your home into a custom-made Mario Kart track. You use your Switch to control your real-life kart, and watch it race around the living room!

My only complaint with this game is the fact that you have to have enough floor space to lay down a track to play, so if you live in a small apartment, this may not be ideal.

The Nintendo Switch has been a hugely successful console in the 5 years since its release, and a major part of this success is due to a wide variety of Mario games.

Each and every one of these games offer fun and engaging gameplay, innovative use of the Switch’s Joy-Cons, and they are great for gamers of all ages and skill level. Looking to the future, I have no doubt that there will be more Mario games being made and remade.

They have been a major contributor to the success of the Switch and their popularity is a testament to the enduring appeal of the Mario franchise.

Anyways, this is just about all I have for today.

As always, thank you for reading, have fun, and happy gaming!